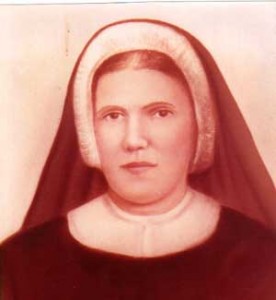 Battistina Vallerga was born to a poor family in Varazze, on November 14, 1831. Her simple parents were Giovanni Vallerga and Geronima Baglietto. Battistina was the eldest of the six children. The education and the good example she received from her parents made her a very responsible person, always ready to be of service to others.

She deepened her faith with prayers and strengthened her devotion to the Immaculate Virgin Mary. Her ideal was to live in humility and simplicity like Mama Mary did in her home at Nazareth.

In the midst of a harmonious living, a painful event occurred in the family when Mama Geronima died and at that time, Battistina, was only 16 years old. The family was in need. Her father’s meager earnings were not enough to support them all. In her own little way she helped her father by rendering services to other people using her talents and skills in stitch work.

The family of the Public Prosecutor of the King of Sardinia hired her for this sensitive work and she did it diligently and with much care. The wealthy Prosecutor’s son admired her and asked her hand in marriage, this was a notable opportunity to have a better life but Battistina intensely refused those splendid wedding which would have made her a rich lady.

She fled from that family because since her young age, she desired to consecrate her whole being to God and it remained strong and ever alive. The attractiveness of the world did not bother her, simply because her primary concern is to ponder the voice of God, calling her to follow him. She wanted to be Christ’s bride, poor and pure.

It was God’s own time when circumstances brought her to the house of Father Francesco Piccone. We do not know the precise date on which Battistina began her service. It can be presumed that Father Nicola Baglietto, Battistina’s uncle had adviced her knowing the desire to consecrate herself to the Lord. He was certain she would find in the holy priest a guide for her vocation.

Even this path was a providence for the fulfillment of her longed desire. The young Battistina revealed to him her great desire of dedicating herself totally to the Lord, and for the service of the poor and needy. The elderly priest saw in Battistina the person placed in his footsteps by the Providence, whom he had awaited for so long a time.

The holy priest realized that the hour of God has arrived. Blessing the young Battistina, Father Francesco Piccone said, “From now on you will not be my servant, but instead, you will be the first stone of a foundation that will be great in the eyes of the Lord.”

On March 1, 1854, with the prayer and blessing of Rev. Fr. Francesco Piccone, Battistina and her … END_OF_DOCUMENT_TOKEN_TO_BE_REPLACED