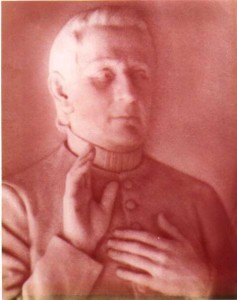 In a big and a beautiful house at Albisola Mare, Italy, Francesco Maria Piccone was born on May 23, 1792 to Bartolomeo Piccone and Lady Maria Caterina Piccone. Seven children were born of this well-off family but unfortunately two of the Piccone children died. They were Antonio Francesco, 14 and Maria Filippo, 11.

This was a tragic event for the family but their faith and trust in God helped them overcome such painful experience. Lovingly they reared their five children, providing them with a strong Christian education.

Francesco, as a young man felt the call of priesthood. To prepare himself, he attended at the Pious Schools under the Scolopian Fathers in Savona. He was later ordained diocesan priest in Savona on March 11, 1815. This was his greatest dream – to offer his life to God and to serve others by educating the poor most especially the youth and to give assistance to the sick. His plan was to put up a school to those indigent children, to take them from the streets and thus provide them with suitable education.

Conscientiously, he worked very hard and concentrated himself to the fulfillment of this plan but this noble desire of having his own school did not materialize instead he taught in the small School of Charity in Savona and later became the Director of this school. At the same time, additional task was given to him by his superior. He was advised to dedicate some time in preaching, hearing confession and counseling. His theological qualifications led him to handle religious formation of the diocesan priests.

He participated exhaustively in all these works. Many believed that he truly lived in the presence of God and that he derived his spiritual strength from his deep devotion to the Immaculate Virgin Mary. During one of his crucial moments he quoted the following lines… “Most Holy Virgin, disentangle my ideas and choose only those may reflect you will “. He was so gentle and good with everybody that was why he earned the title and was called the “Apostle of Good Example”.

On March 1, 1854, with the prayer and blessing of Rev. Fr. Francesco Piccone, Battistina and her … END_OF_DOCUMENT_TOKEN_TO_BE_REPLACED